This is a brief AAR of my AWI game, Race Across Carolina - The Fight for Freemantle, that my son and I ran at the recent Historicon convention in Lancaster PA.  I want to mention that my game was just one of 20 miniature wargames put on by Lard America, a group of gamers with a particular affinity for games developed by the TooFatLardies (TFL).  We have run games at Fall-In (2017), Cold Wars (2018), Historicon and plan to be back at Fall-In this November.  Race Across Carolina utilizes the excellent TFL rule set Sharp Practice.

Anyway, on to the game.  This was the 3rd in a fictional mini-campaign I am running that takes place in the south during the American War of Independence (AWI).  In this game, the Americans are holding the the small town of Freemantle in North Carolina while advance elements of the British army are approaching in search of a rumored supply dump and an abandoned beer wagon.
The players were provided with a colonial 'newspaper', the Carolina Gazette that summed up the situation: 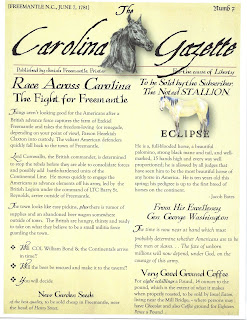 Now, on with the game.

The above photo shows the town of Freemantle.  The Americans deployed at two locations - the camp (middle left) and the bottom of the road (not shown), while the British deployed on the road (top) and had to either cross at the bridge, a ford in the river, or take their chances crossing the river.

Here are the rosters for the combatants: 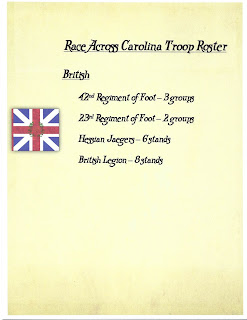 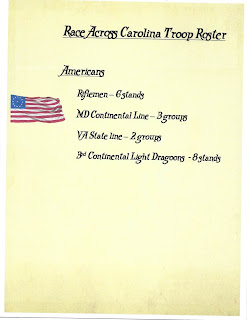 The American riflemen and the VA State Line deployed at the camp while the Dragoons & the MD Continentals came on board at the bottom of the road.

The British were led by the Jaegers and the 23rd Foot, who forded the river, followed by elements of the Black Watch (42nd) and the fearsome British Legion.

The colonial riflemen and Hessian Jaegers quickly engaged in the woods behind the brick townhouse with the riflemen getting the worst of it, being forced to withdraw.  The Jaegers commander, Capt Friedrich von Jungkenn was wounded in the exchange.  BUT, the Jaegers controlled the woods and the abandoned beer wagon as seen below.

The 23rd Foot quickly rallied to support the Jaegers and counter the advance of the Virginia State Line troops; meanwhile the Maryland Continentals were progressing up the road toward town.  They were unfortunately slowed by a Sharp Practice random event - "Damned Dog!"  The leader, COL. Bond trod in something unpleasant!

As time for the game was quickly expiring, MAJ Robert Stack and the 3rd Continental Light Dragoons charged into the British Legion, ably commanded by LTC Barry (Bloody Barry) St. Reynolds, and were quickly routed by the green-jacketed horsemen.  The MD Continentals did not make it to the action and on the British side, the 42nd Foot, after being held up by the water cart at the bridge crossing, were just entering as support for the 23rd when the game ended.  At the end, the Americans maintained a tenuous hold on the town, but the tavern (seen in the photo above), had no beer to serve the thirsty soldiers.

Below are couple random shots of the rest of the game board.


We'll return at Fall-In this November. 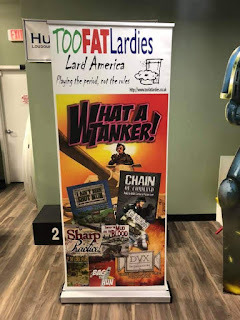